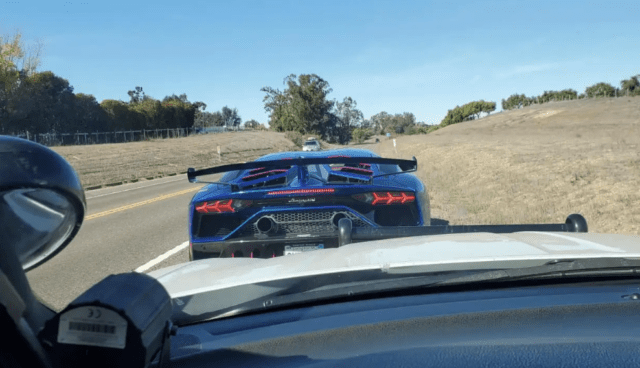 SANTA BARBARA COUNTY, Calif. – The driver of a Lamborghini was somehow stopped and ticketed for reckless driving after reportedly traveling at nearly three times the posted speed limit on a winding roadway in Santa Barbara County. The unidentified driver was tracked down by officers of the California Highway Patrol on Highway 154 on Sunday, KTLA reported.

The CHP Buellton office issued a public notice, “SLOW DOWN!!! 154 is the State Route NOT the speed limit,” after the driver of a black Lamborghini was clocked at 152 mph in a 55 mph zone.

Police showed the Italian brand sports car on the side of the road and a portion of the citation for reckless driving, a misdemeanor, along with the speed of the driver.

Highway 154 is a winding narrow road that takes motorists along tight serpentine curves between Santa Barbara and the Santa Ynez Valley. Although “there are a handful of straightaways and passing lanes,” KTLA reports, “they are few and far between.”

As travelers prepare to hit the road during Thanksgiving vacation, CHP has cautioned drivers to “save it for the track.”

“We know how tempting it can be to ‘open it up’ when your car is fast and the weather is beautiful, but save it for the track,” CHP noted on social media.

Family Turmoil: Boosie Accuses His Cousin Of Stealing Money From Him, His Cousin Responds!