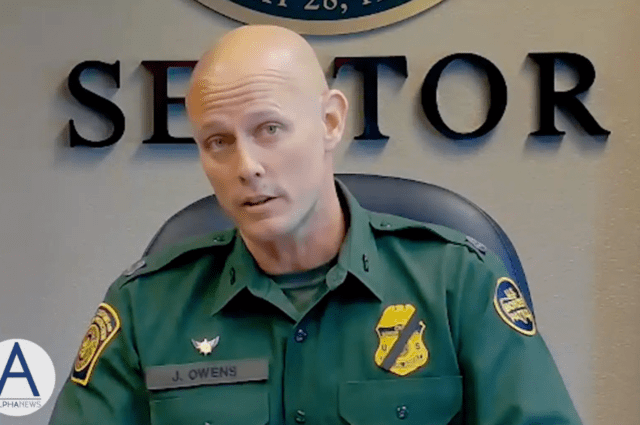 A U.S. Border Patrol chief in Texas joined Liz Collin Reports this week to shed more light on the national security and humanitarian crisis at the U.S.-Mexico border.

Chief Patrol Agent Jason Owens oversees the Del Rio sector on the border, which covers over 240 miles of border with Mexico and 53,000 square miles in Texas. His sector has almost 1,700 sworn Border Patrol agents and 200 support staff, which, he says, may sound like a lot “until you start talking about 24 hours a day, 7 days a week, 365 days a year.”

“Most of the time we have 40-50% of that manpower on duty dedicated exclusively to the processing effort of the migrants who are basically crossing and turning themselves in to us,” Owens said.

The Del Rio sector is one of nine along the southwest border with Mexico. Last fiscal year (Sept. 30, 2021-Oct. 1, 2022), border agents apprehended over 2 million migrants at the border, and almost 480,000 of those were within the Del Rio sector.

“And so far this year, this fiscal year to date, we’re about 50% higher than we were in fiscal year 2022 at this same time,” Owens said.

He said security and humanitarian concerns are two “very separate” problems. Migrants are turning themselves in to Border Patrol when they cross illegally, but it should not be Border Patrol’s job to process them, Owens said.

“Our job is to be out on patrol keeping the bad things and bad people from coming in, and when we’re stuck dealing with this humanitarian crisis, we cannot be out there on patrol interdicting narcotics, the sexual predators, the gang members, the cartel members,” he said.

While morale is low, Border Patrol agents are still “some of the most resilient and dedicated people” he knows.

“The sheer amount of deaths that they dealt with, the rescues, over 3,000 rescues in fiscal year ’22, these are lives saved by Border Patrol agents. The incident in Uvalde that our men and women were involved in. They’ve taken some hard hits; they have absolutely weathered a storm,” he said.

No one talks about how these men and women wake up every day and go back to work, he said.

“That kind of dedication demands our admiration and respect and attention,” Owens added.

He — along with most Border Patrol agents — doesn’t see a light at the end of the tunnel.

“Until there is a meaningful consequence for entering the country illegally between the ports of entry, I don’t anticipate that slowing down … they need to be removed to their country of origin or prosecuted for violating the law,” Owens said.

While rescinding Title 42 in itself doesn’t worry him, it’s the false messaging that comes with it that causes him concern. Owens said only 25-30% of apprehensions currently fall under Title 42; most are amenable to Title 8, which will always be in place.

“The problem is the wrong message that gets sent, saying that … somehow when Title 42 goes away that it’s an open-door policy and that everybody should start making their way and causing a further influx and thus putting more lives in danger,” he said.

He believes it’s a humanitarian crisis at the border, and it needs to be covered more by the media and politicians.

From the minute a migrant leaves their home and puts their life into the hands of the cartel or smugglers, they’re in harm’s way, in danger of being robbed, raped, or killed.

“The smugglers don’t care, they don’t care about who lives or who dies. They only care about making the money,” he said.

He also believes the immigration process in the U.S. needs to be examined.

“We need to have it set up in a way that enables people that want to come here lawfully, and work and contribute — we need to have a way for them to do that safely,” he said.

This would allow agents to focus on the law enforcement component of their jobs, he explained.

Last year, there were 200,000 known “gotaways” — many likely got away because agents were tied up with processing migrants.

“I don’t think the majority of this country is getting the full sense of what’s happening down here,” Owens said.